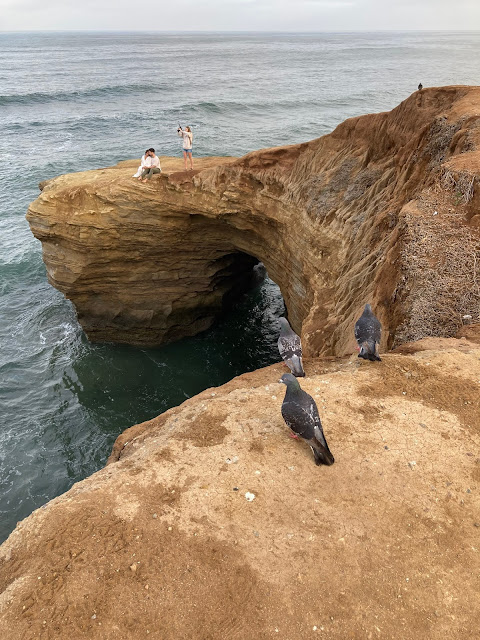 With pandemic restrictions rapidly lifting, and tourists pouring in, I’m sharing some of my favorite weekend walks. Last Saturday, some friends and I took in iconic Sunset Cliffs between Ocean Beach and Point Loma proper. Let’s start here.

A Brief History of The Cliff’s Rise and Decline

There are several spots in San Diego that generate the lion’s share of FOMO-worthy photos on Instagram and other social media. Sunset Cliffs is one of them.

Historical websites often open with how a sporting goods magnate spent a couple million dollars in the 1910s to make the cliffs publicly accessible with Japanese-inspired landscaped walkways and stairways, shelters and benches, caves and even a saltwater swimming pool replenished with each high tide. Albert Goodwill Spaulding bequeathed his 64-acre seaside park to the city of San Diego, which did nothing with it. A decade later, developer John P. Mills assumed ownership and restored some of the park’s features. He too gave it back to the city to preserve. Instead, local officials let the area deteriorate—then claimed it was too unsafe and removed remaining park items to discourage use.

(Of course, humans congregated on the cliffs well before the early 1900s, when the Kumeyaay gathered seafood in between tides. And without fancy stairways and railings.)

What has endured, however, is public ownership. The coastal bluffs, arches and sea caves belong to the people, not private homeowners of adjacent multimillion-dollar dwellings bisected by a winding, two-laned road. 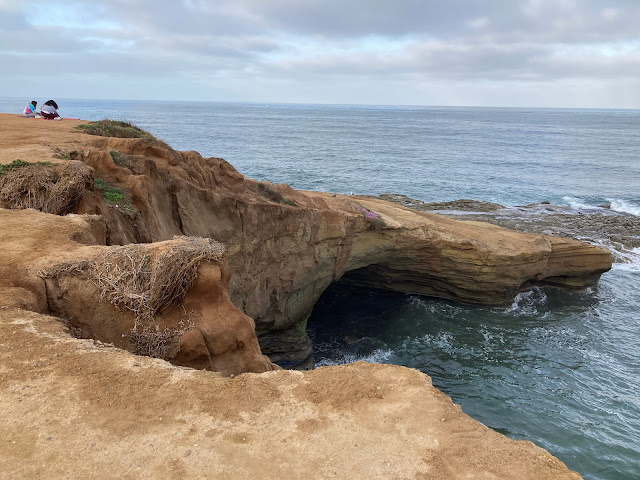 Where to start: There are several places to begin the walk along the coastal strip between Adair and Ladera streets. We always start in Ocean Beach because (a) it’s usually easier to find free parking early mornings and (b) there are restrooms and restaurants to patronize at the end of a long walk. Both fill more quickly by mid-day, if not sooner.

One of the biggest lots is at Dog Beach, an attraction in itself. There also are a couple of smaller lots within the oceanside park itself. And, though Sunset Cliffs locals probably don’t want me saying this, there typically is plenty of side street parking on the residential side of Sunset Cliffs Blvd midway up Sunset Cliffs Natural Park. 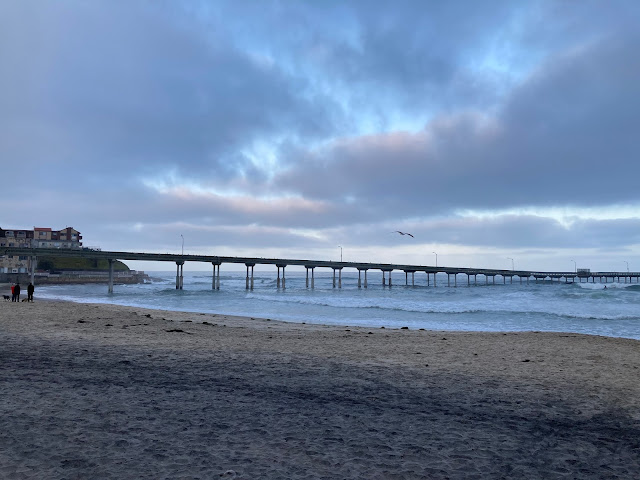 Assuming you park near Dog Beach, you’ll hug the sidewalk along the wide beachfront until you approach the Ocean Beach Pier. You can then turn left onto any one of the side streets that run perpendicular to Sunset Cliffs Blvd. Lots of cute cottages and funky shops in this stretch. We like to zig-zag to the main drag to start heading uphill.

There’s a sign that signals the start of the cliffs, as if it isn’t evident. What maybe isn’t obvious are the trails. This place can get crowded on weekends, so people just move along randomly and you likely will too. There are some clear paths in places that you need to follow—given the proliferation of KEEP OFF signs.

Despite the warnings, every year someone is killed falling from the cliffs. Given its name, hordes turn out to watch the sunset and some stay until dark, sometimes drinking and sometimes just losing their footing. I also once saw a guy snag a shark while fishing one evening from the cliffs.  Took three people to reel it in and twice that many to convince the men to let it go back into the sea. 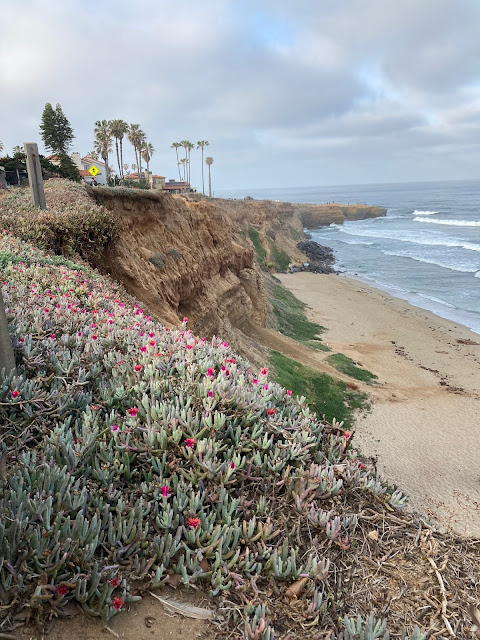 What to see: There’s plenty to take in on the way to Ladera, where there’s a park/parking lot and a dirt path leading to the Pt. Loma Nazarene University campus. I love to alternate taking in the custom homes lining the curvy boulevard with walking paths, sea caves and seabirds. Getting a clear shot of the cliffs without humans is hard. This place is popular.

We saw someone setting up for what looked like an elaborate picnic; most weekends, it’s weddings and engagement shoots taking place on some of the most picturesque (and stable) bluffs.

Depending on your pace and number of photo stops, you can get from Dog Beach to Ladera in about an hour. It takes less time going back because it’s mostly downhill (though the incline is gentle compared to other parts, such as the aptly named Hill Street). There are a couple of tight spots along Sunset Cliffs Blvd. where pedestrians must take to the road because of cliff erosion. Be careful, just in case motorists are distracted.

I love Luscomb Point near the walk's peak for both sunset viewings and because it’s big enough to socially distance. Many tourists see that first lot and crowds and assume that’s the best spot. It isn’t. Keep going up for ideal views. And if you can, go right at the split. You'll be happy you did with unparalleled sunset views. 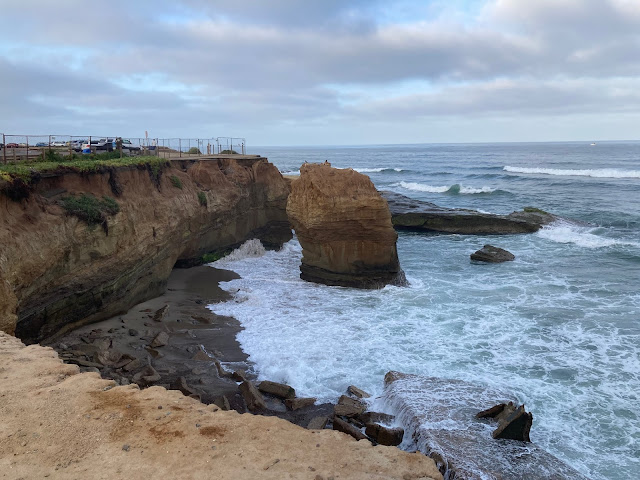 On the return: We always stop for breakfast on the way back. Most recently, because we weren’t comfortable eating inside yet, we opted for takeout at The Cliff’s Café on Sunset Cliffs Blvd. just a few blocks from a grassy park with widely spaced picnic tables.

When we do eat indoors, it’s OB Surf Lodge right on the beach. If "authentic travel" is important, might as well join the long lunch lines at Hodad's. If you are looking for a mid-range dinner spot , I recommend BO-Beau Bistro on West Pt. Loma Blvd. or The 3rdCorner across the street. Really, though, there are a lot of great eateries representing all price points. And public restrooms that are cleaned regularly. Or at least were when we last went. 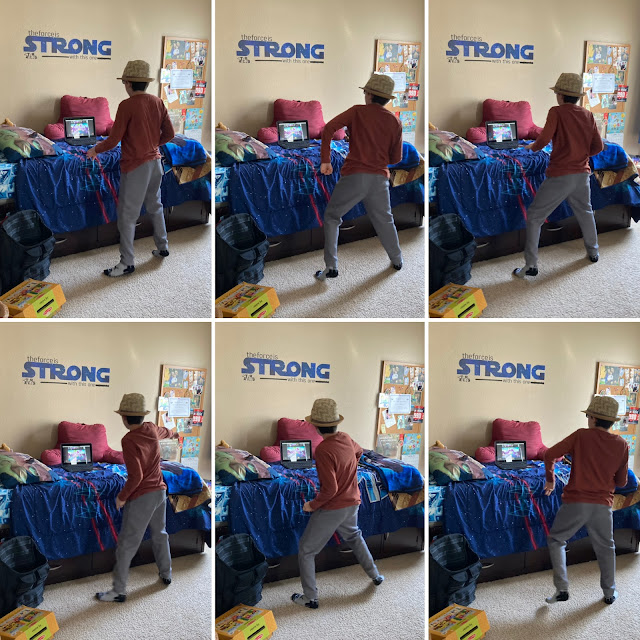 I miss mornings when the only goal was for him to be on Zoom with a full belly and clean(ish) shirt by first period. I miss the soft openings, the overheard banter between the teachers, aides and students before getting down to business. I didn’t get much of my own work done during online school hours, but I did learn a lot.   We opted to send our child back to school last week, as did about half of San Diego Unified parents and guardians. This meant our middle school could offer on-site classes four mornings a week, versus the planned two. But it also meant half of all students have something still holding them back. Those that are on campus must sit farther apart and follow one-way foot-traffic flows and, of course, wear masks at all time. No water fountains work, but there are bottle-fill and hand sanitizer stations. Every single child is sent home at 12:30 with food for lunch, dinner and tomorrow’s breakfast. The online kids’ families line up in their cars for their food bags. If t
Read more 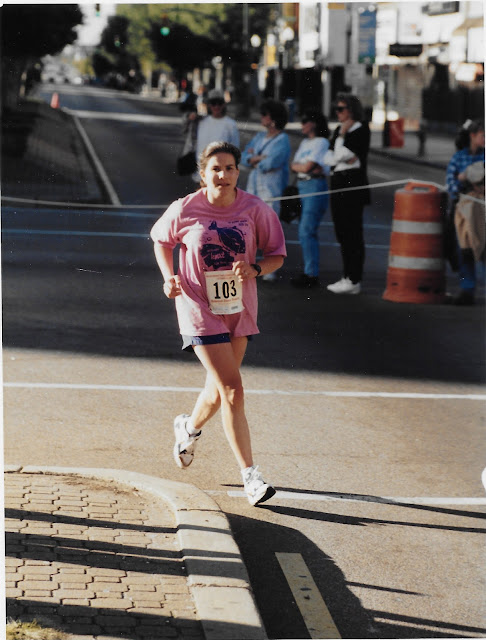 The other week I was doing some deep cleaning and came across this race photo. It resurrected lovely memories from one of my most unpleasant finishes. It also reminds me of how much has changed over the years--to both me and marathons.   Note the slant of the sun . This shot was taken in the last miles of the course, with the sun already inching toward the western horizon. The Richmond Marathon used to start at 12:30 p.m. on an October Sunday to allow locals time to go to church before downtown streets closed. This made weather a wildcard. It could be the cool fall day long-distance runners dream of, or it could swampy. I got both, with heat at the start but a cool breeze at the end.    Now almost every marathon starts early morning to accommodate bigger crowds .   Note the bib number . This race had less than 500 marathoners the first time I ran it. You could sign up race day, especially if you ended up not running that much more popular marathon two hours north in Washington, D.C.
Read more