Showing posts from January, 2008
Show all

Whose Image Is It Anyway?

When Did an iPod Become a Running Essential? 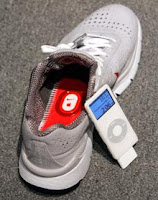 I get the point of this consumer piece: Running ain't cheap. But I question some of the "essentials". I buy my running shoes at a running store, so I'm not aware of what other sports-specific shoes cost. Do tennis players, aerobics enthusiasts, walkers, etc., pay $90 to $180 for shoes? MSN Video: The Cost of Running
Read more

Can’t We Just Be Finished With This Month?!

- January 23, 2008
First the garage door openers broke. Both of them. Then the front door latch. Then the front and back sprinklers. Again. Then my digital camera. Then my cell phone. Then my watch. Then one of the cars. The expensive one. So my husband and I delayed exchanging holiday gifts. Then the Christmas credit card bills for all the others arrived. And an unusually high (but justified) car insurance bill. And an unusually high gas and electric bill. And a water and sewer bill that somehow doubled. And receipts for two college tuitions, only both with balances due. So if you find me hiding under a rock, please understand. Right now it’s all I can afford.
Read more

- January 20, 2008
I am sitting here in my robe and slippers, sipping weak tea and holding back a little nausea, a little nasal congestion and a tear or two. What's strange is I'm not feeling sorry for myself. No, I'm feeling sorry for another running blogger that as I type is probably starting to struggle along that open stretch of Palomar Airport Road, with its rolling hills and relentless sun. Bex is running the Carlsbad Marathon this morning, with injuries and without friends she expected on the course. A small group of us gathered last night at a downtown Carlsbad Italian restaurant to discuss the race and running and triathlons and one of the women there was supposed to help her through the last part of the race. Only she bailed on Bex to watch the Chargers vs. Patriots game this afternoon. I wanted to fill her shoes but stopped short when I realized (a) I had a business call to make Sunday morning; (b) I can't run that far right now; and (c) I can't run that fast right now eit
Read more

- January 17, 2008
Very telling indeed when you start to pull together outfits for work and realize that for the past few weeks, your selections have been based not on the weather but on whether stuff still fits. I donated blood yesterday, so I've got to lay low for the next two days (it was a rough one and I was told not to do any strenuous exercise for a full 48 hours). The nurse said I have terrific, iron-rich blood ("Oh, it's so dark. You must eat well.") and then I told her my weight ("Oh, that's a little high for your height. You must eat too much.") She smiled. I smiled. Then I exchanged the Cheez-Its for pretzels while waiting for the wooziness to pass.
Read more

Do I Overreact or Just Overeat?

- January 14, 2008
So here’s what happened. On Saturday morning, I decided against running on the closed off trails. I’d violated the rules last winter after a rainstorm, but that was before I lived close by. I have a different kinship with this place now, and easier access. I can run any other time, I thought. Then, inspired by so many of your comments, I decided to go for it Sunday morning, when it’s even less likely someone will see me head in or head out. I got about a half mile in when I was stopped in my tracks by this shrill, primal scream coming from the dense foliage that lines the main creek bed. It most definitely came from a four-legged animal, but it was hard to tell whether it was domestic or feral. Most likely, a dog or a coyote was caught or struck, even killed, by a rattlesnake. In any case, if that’s what happened when you broke the rules, I wanted no part of it. So I ran hard as I could back to the suddenly attractive roadside, vowing to not return until it was sanctioned by the city
Read more 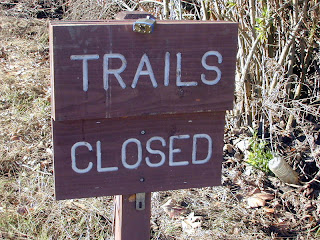 You have been itching for weeks to go for a rambling trail run within this glorious canyon preserve near your home. I won’t mention which preserve for reasons that will soon become obvious, but anyone who is a faithful follower of this blog knows which one I’m talking about. It’s big, well-maintained and typically packed on weekends. The place has been closed for weeks now due to earlier rains. The gates remain locked and signs are posted at every official entrance warning people to stay out. But you know of a “trailhead” the locals use as a bypass, about a mile from all other eastern entrances. It’s all single track and, far as the eye can see, dry dirt. But, truthfully, the eyes are aided by bifocals now -- bifocals sitting on the kitchen countertop at this moment. If it’s officially closed, then no one should be policing it for tresspassers, right? But the city’s closed the preserve so the grounds can “heal” after a huge heap of rain, and your entry could spark copycats and cause th
Read more

Let's Give Peace Another Chance

I love running along Sunset Cliffs in Ocean Beach. Most San Diegans do. For the past 18 months, as you climbed the cliffs, you'd see this groovy, stained-glass peace symbol that someone mysteriously erected. You can't really tell from this file photo at the San Diego Union-Tribune Web site, but that island rock is a ways off and difficult to scale, so whoever put it up went to some trouble -- both in the artwork's construction and placement. I haven't been out that way for some time, but I was saddened to hear it had been stolen and its creators were appealing to the thieves to return it so it can be displayed again, maybe this time in a local gallery. I'm sure soon something else will replace it on the rock (that seems to be the OB tradition), but it's pretty hard to top that one for longevity and symbolism -- especially in today's troubled times. For more: Peace Rocks! Web site
Read more

- January 07, 2008
Mark, the Running Blogfather who created the most comprehensive listing of running blogs, has revamped the Complete Running web site and plans to flush all of the inactive running blogs and make it easier to find other runners through location, gender, ability, experience, etc. Here's his message: Most people around here know about the Running Blog Family Directory (RBF) - the web's most ginormous list of running blogs. Until yesterday, the RBF was a one trick pony - it was just a big ol' list. Well, the RBF just went through a huge upgrade. It's now search-able in a big, big way. You can now search for blogs by: Location (city/town/province/state/country) Gender Favorite Distance to Race Ability Tags/Key Words But, we need your help to realize the RBF’s full potential. Why? Because, right now, we have over 1600 links in the RBF that don't contain things like: Location (city/town/province/state/country) Gender Favorite Distance to Race Ability Tags/K
Read more

- January 05, 2008
I didn’t run today, but I feel as inspired and motivated as if I too braved the wind and heavy rains for the first run of this year’s Rock ‘n’ Roll marathon training program. I landed a coveted inside job helping hand out T-shirts and shoe tags, and got to briefly say hello to fellow running bloggers Irene and her husband Michael and Laura . But instead of running my feet, I mainly ran my mouth while hundreds of others circled a thoroughly drenched urban park. Afterward, a group of us women went to brunch at Hob Nob Hill , a landmark restaurant near Balboa Park. I was in awe of each “sister” in my company. There was Tara, my one-time training partner who last year ended up as a last-minute marathon pacer despite a terrible training season and came through for all the racers with a few minutes to spare. Nancy is one of the track club’s most enthusiastic volunteers and looks terrific after diligently losing weight. Each marathon, instead of running a steady 26.2 miles, she runs the str
Read more

Back to the Bad Ol' Days

- January 03, 2008
When I first launched this blog almost three years ago, it alternated items from my running life (Run) with my former job covering information security (DMZ). It was an odd fit that loosened considerably after I joined the RBF and fell apart entirely when I left journalism and IT security. I think for this year I will once again pepper this space with the occasional paranoia post because I still believe in this blog’s original mission: to make us all a little better informed about the digital and physical worlds. With that, I today appeal directly to all of you who use Facebook. A great debate is currently underway, prompted by a big-time blogger who had his Facebook account disabled after he introduced a script to pull data from the thousands of friends he’d accumulated. (It should be noted that, despite his rock star status, this guy accepts pretty much anyone who wishes to be his friend.) The key issue is: who owns the data within the social graph? Is it the user who collected th
Read more

Welcome to a New Year, Everyone 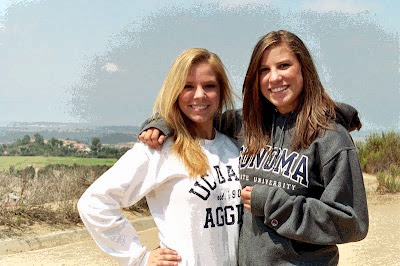 "Reflect on your present blessings, of which every man has many; not on your past misfortunes, of which all men have some." --Charles Dickens
Read more
More posts