Showing posts from November, 2006
Show all

This Eye of the Tiger Has Cataracts

- November 30, 2006
In movies about aging athletes making a comeback, things don’t begin smoothly. There are numerous defeats before the moment the stars miraculously align, the penultimate punch unfolds in slo-mo and the background music builds to a crescendo. My return to “competitive” running on Saturday is going to resemble one of the later Rocky movies, specifically the part where the boxer gets his first serious ass-whooping. This became clear to me during the third of four 1600s at 10k pace during Tuesday night’s workout. For those unfamiliar with the track, 1600 equals 1 mile. You run four laps fast and then jog another before starting again. Those racing this weekend got a free pass and didn’t have to do the full six-mile set. I’d done something beforehand to get me fired up. I went to my old track club’s web site and looked up recent results, searching for women I remember racing more than a decade ago. I was amazed at how many names I recognized and even more awed that they still clocked s
Read more

Nature on the Rebound 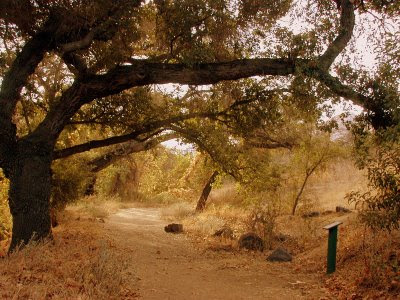 We opted this year to spend our annual post-Thanksgiving family hike in East County, specifically in an area ravaged three years ago by the Cedar fire. The blaze would eventually consume a third of San Diego County, kill 14 people and come within a a couple of hundred yards of our own home well northwest of here. I was, of course, running when disaster hit. This one would have been easy to run, but my fellow hikers like to linger. I did too that weekend, given an earlier blood donation left me lagging physically for several days. At least this time my multivitamin and last-minute spinach-stuffing got me past the iron screening. We took two trails. One riperian, where we were cooled by a canopy of twisty oaks and the trickle of a nearby stream. The other was up to a rocky summit that proved far more difficult to reach, just as a hiking guide had warned. The last stretch is pretty much slick slate and loose gravel, with nothing for shoes to grab for traction. And if you do make it
Read more

Counting Down the Seconds

- November 22, 2006
Now that I've established a new running base (which is half my weekly distance before injury), I decided it was time to rededicate myself to the track. So I showed up last night at Balboa Stadium for the SDTC's annual Turkey Trot. Everyone arrives at 5:30 to record their predicted time for two miles. Then we warm up and remove any watches or other time-telling devices. At 6, we take off, with runners moving into Lane 1 by the time we've done our first rotation. A timer calls out our first split just to help people sense their pace. On the final lap, we move to Lane 9, and note the official stopwatch time as we finish. The man and woman who come closest to meeting their prediction win a big frozen turkey. I ended up running the entire time with my friend Vicki, and I ran my mouth the entire time too. Now, this actually helps me in tempo runs. I can maintain a faster pace if I talk. But it does have its drawbacks, mainly you easily loose track of your laps. By our fifth ro
Read more

What Is Wrong With These People?

- November 20, 2006
I've had this title to a Po Bronson book on my mind all day, thanks to a recommendation by a dear friend. And just as I was convinced there are no limits to the depths of my family's dysfunction, I find out that the Los Angeles justice system is way more screwed up than anyone I know. You've got a man who mows down 10 innocent people fleeing an accident, injures 70 others, shows no remorse and never even apologizes for the carnage he created -- he even blames the victims at the scene! He's given the harshest verdict by a jury, called callous by the sentencing judge and then gets off scot-free because it would cost taxpayers too much to care for him in prison. The only consolation for those poor families is knowing that once George Weller dies, he won't be joining their lost loved ones in the afterlife. Probation for elderly driver in deadly farmers market crash
Read more

Try This One On For Size

- November 20, 2006
Excuse me while I admire my new windbreaker from last weekend's track club awards dinner and instead steer you toward's my article on today's Complete Running Web site . Doesn't look like I'll have a chance to try out my new jacket anytime real soon. Today's forecast: sunny and in the 90s.
Read more 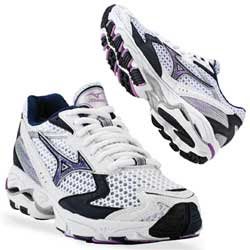 ...feel like we were meant for each other from the first time we met. ...supposedly know how to handle my formerly fractured hip, according to the guy at Movin’ Shoes. So far, he’s telling the truth. ...are allergic to fresh asphalt. ...have a hard time believing my first pair of running shoes came from a general store that sold far more food than footwear. ...want you to know I lie about my weight. ...seem far more punctual than I recall the Sauconys ever being. ...wanna know what’s up with the flabby arms. I mean, didn’t I use those "a-firming" crutches all summer? ...are as pissed as I am about that last parking ticket. ...ain’t buying that for my Confirmation during college, I was blessed with a brand new pair of Brooks instead of a Bible like everyone else. [True story, swear to God.] ...wish they went to the gym more often. I tried explaining that some of us have a job to do where we occasionally must work unexpectedly longer and harder, to which they resp
Read more 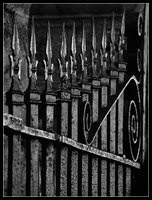 Say you are running just before daybreak and you notice a mechanical gate at the end of a quiet residential street is mysteriously left open. It’s one of those heavy wrought iron fences flanked by dense foliage to help insulate the fancy housing development just beyond. The neighborhood sits high on a hill, metaphorically suggesting those within must look down on the rest of us. It’s still dark, though not for long. And it’s quite foggy, so there’s a good chance you can run in without being picked up by the surveillance cameras – or picked out of a police lineup. Besides, though you are clearly disobeying the big Do Not Trespass signs, all you want to steal are glimpses. Do you do it? [Photo by Sher Hogue at DPChallenge.com .]
Read more

- November 10, 2006
Today's fitness section of the local newspaper talks about the growing popularity of half-Ironmans and half marathons. In 2004, the World Triathlon Corporation, which essentially owns the Ironman name, licensed six half-Ironman races. By this year that figure had mushroomed to 18. Next year the figure will climb to 22. There are a number of reasons tri junkies are longing to swim 1.2 miles, bike 56 and run 13.1. It's a significant accomplishment, yet not so daunting and time consuming as an Ironman; More people are joining the sport at the grass roots level, as evidenced by USA Triathlon's increased membership – approximately 80,000 this year, compared to 40,299 in 2004; With a growth in Ironman-distance events, plus novices taking up the sport, the veterans and the newbies are compressing at both ends, creating a demand in the middle. Similar reasons are given for the growth in half marathons, which experienced the largest jump of any road-race distance. The num
Read more

- November 09, 2006
To running bloggers like D and Shore Turtle : Thanks for reminding me that being the best you can be takes hard work. If the outcome comes close to your level of training – and it will! -- you’ll be sporting big, big smiles in about another week, just like all the other outstanding bloggers who’ve gone before you this season. So many PRs! You people keep this up and I might have to do something crazy like track my mile splits. To Louise: Thanks for giving me more incentive to go to the gym. Sitting across from you at lunch today and discovering you’re almost 10 pounds lighter, 3 inches trimmer and, gosh darn it, 6 minutes faster than me now made me pedal harder and farther on that bike. Who knows, your 200-calorie salads could be next. To Cate: Thanks for that e-mail mentioning that because of me you started running. And now here you are heading into your first half marathon. We’ve come a long way since drunken dinners before Leon Russell concerts, haven’t we? I know I was suppos
Read more

- November 07, 2006
I distinctly remember the first time I headed to the polls. I was barely 18 and didn't even know I was registered. But my mother did and came into my bedroom one spring primary afternoon to announce I was coming with her to stop some politicians from ruining the country. Sounded good to me. Thus, I duly casted votes for politicians I'd never heard of, that day or thereafter. They all lost. Some years later, when my mother thought she was dying, she bestowed upon my sisters and me some of her most cherished items. My sisters got jewelry and artwork. I got old photographs and a pile of thank you letters dating back to the Lyndon B. Johnson Administration. They were all short, obligatory missives from legislative aides, lacking any of the conviction in my mother's original letters. There also were a couple of White House reports thrown into the batch from the Nixon years, the kind mass-mailed to voters with addresses on file. Two things occurred to me as I sifted through th
Read more

The Way to Be Remembered

- November 05, 2006
It takes a lot to get me off the couch at this hour just to write a blog post. I think everyone should read this column by Bill Plaschke in today's Los Angeles Times. Make sure you read it to the very end. I should warn you: Keep the Kleenex close.
Read more

Another Time, Another Place 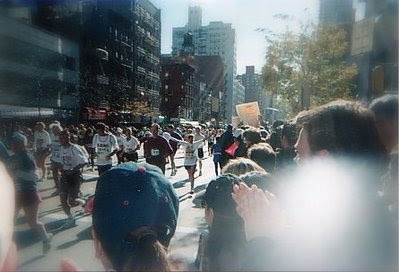 The other week I was rummaging through old photo albums to prepare for my daughter’s birthday party and I found pictures from my New York City Marathon 10 years ago. The event itself would be marked by one of my more embarrassing mishaps. See, I always wore a very old pair of my husband’s swimming trunks for good luck. They had deep pockets, which I filled to the max on that bitter-cold morning. Combined with the ancient waistband’s eroded elastic, the drawers dropped just as I entered Brooklyn. Suddenly bare-assed (well, I did have on skimpy undies...) and tripping, I moved to a median and used a safety pin from my running bib to keep my bottoms secured. I remember shaking as a policeman came over to yell, “Hey, get offa there!” Over the course of the next four hours, the swim trunks kept coming loose, forcing me to stop and tighten them again and again. Why I didn’t just fasten them to my shirt, I’ll never know. I had a newspaper column back then and this one published on the e
Read more
More posts